Perhaps the best known radioactivity is that of carbon 14 with its 6 protons and 8 neutrons. In each and every 5,730 year period 50% of carbon 14 nuclei will have become nitrogen 14. The process is called beta decay and involves a neutron becoming a proton and an electron and the emission of an antineutrino.

The lengthy half life of carbon 14 enables scientists to establish by “carbon dating” the age of a carbon life form remnant. A lesser known isotope of carbon, carbon 11 lasts only 20 minutes. The decay involves a proton becoming a neutron and is accompanied by the loss of an electron. Carbon 12 and 13 are energy stable.

As with my view of electrons I regard neutron and proton particles as energy machines with energy desires. They don’t just respond to surround energies they pro actively seek them; they are the source of intelligence. Each particle has a role to play. The much smaller more mobile electrons draw in energies, sort them and dispatch them either away from or toward nuclear particles. They find space away from other electron energy gatherers to best perform their role. Outer electrons may be involved in photon energy flows to several nuclei. Protons are intent on collecting suitable and limited photon energies from electrons and dispersing and exchanging high volumes of low energy photons with neutrons. dispersing it to neutrons. The vibrating nature of all particles results from their controlling of the photon energy streams that are exchanged between them.

Neutrons are in no way neutral. They too have energy desires and exchange energies with protons. They can create protons and electrons from themselves and did so in the first second of the big bang. The neutrons in earthly structures need adequate but not precise numbers of protons to supply their energy needs. It is why elements exist with varying neutron numbers for the same proton content. Such variations are called isotopes and some are more stable than others.

Neutrons and protons are about 2000 times bigger than an electron. The spaces in a nucleus are near that of their particle size. However we must not think of neutrons and protons as ball like because they both have very high percentages of space within them. Though they have never been isolated quarks are said to reside in nuclear particles with gluon energies acting between them providing the short range strong nuclear force. I think it more likely that gluon energies are simply high volumes of low energy photons. The high volumes of photons would account for the strength whilst their low energies would account for the short range over which they are effective. Is it not simpler to regard photon energies as the interacting medium between all particle structures.

Elements and their isotopes are neutron and proton combinations. Usually they contain an even (as opposed to odd) number of each. Each dot in the pink area of our graph represents an isotopes proton to neutron ratio. At low total nucleons we see a neutron to proton ratio of 1:1. At higher totals nucleons the ratio is about 3 neutrons to every 2 protons.

All isotopes are not of like stability. A line down the middle of the pink area would represent preferred protons to neutron ratios. Those toward the outside of the pink area and away from that line have either too many neutrons or too many protons and are more likely to decay to stabler energy states. More stable states have more energy efficient ways of getting and satisfying their particle energy desires..

Isotopes with large proton plus neutron numbers are also a cause of instability. The nuclei of large isotopes above Bismuth (209) are most likely to radioactively spit out alpha particles of energy. I think they do so because the outer particles are starting to make it difficult for the inner nuclear particles to gather electron energies. I also suspect that alpha particles are released because many internal structures are built from alpha particles linked by additional neutrons.

Not all large nuclei spit out alpha particles Some large nuclei can undergo spontaneous fission splitting and forming isotopes of two smaller elements, possibly accompanied by the emission of a few neutrons.

If the neutron to proton ratio is too big in a nucleus the desire will be to lose neutrons and gain protons and so a neutron becomes a proton and an electron (beta radioactivity emission). Also emitted in this process is an anti neutrino particle of energy in the process.

If the neutron to proton ratio is too small in a nucleus the desire will be to lose a proton and its associated electron and gain a neutron. This can involve pulling a low shell electron into the nucleus in a process called electron capture or by emitting a positron (beta positive radiation) that then goes on to annihilate with an electron. Both processes are accompanied by the emission of a neutrino of energy.

The last form of radioactivity is termed gamma radiation. It makes no changes to the particles involved and is the issue of high photon energies. It happens when high levels of energy exchanges between excited nuclear particles subside.

As an example of fusion the gravitational pressures in our sun core enable hydrogen to undergo fusion to helium via heavy hydrogen (gain of neutron) and light helium (gain of proton). Tremendous amounts of energy are released from a few grams of matter. No wonder science is experimenting (Tokamac) with fusion here on earth as it offers the possibility of clean energy with no burning of carbon and hydrogen.

As an example of fission atomic substations deliberately create the unstable isotope uranium 236 from uranium 235 so as to release energy as it decays to barium and krypton. The atom bomb used a similar but uncontrolled change.

Notes and thoughts on particle energies

External photon energy: All separated particles and particle structures desire and emit the photon energies of surround space. The desire may bring them closer to other particles or structures and increase the photon exchanges between them. Too close and the exchanges start to exceed the particle energy needs. Really close and the interacting energy forces are into tons. Most will move away; some may find it beneficial to undergo a change of state, chemical change or nuclear change.

Anti matter and charge: The anti matter term refers to anti particles. Every particle seems to have an antiparticle. The best known is perhaps the anti electron or positron and so we will concentrate on it. The positron has exactly the same amount of energy as an electron, but it is said to be positively charged. I liken charge to the suck blow actions of my garden vacuum. In suck mode it has a concentrated air suck and disperses the air. In blow mode it pulls in surround air and concentrates it in a blow. Protons and positrons have concentrate energy gatherings. Electrons have concentrated energy deliveries. It is why positive and negative are drawn to one another. However positrons can’t control electrons like the more massive protons do and so they collide and annihilate and producing high energy photons.

Neutrinos and antineutrinos: Antineutrinos particles of energy are produced in beta negative decay and neutrinos in beta positive decays and in electron capture. Their energies are equal and about one 5oo,oooth that of an electron. Neutrinos are produced in vast numbers in the energy changes of stars and travel at near light speed with very little desire to interact with particle structures. Like neutrons they have no noticeable charge but like neutrons they will interact with other energies if the conditions are to their liking. They will pass right through us and some will pass right through the earth but the deeper the structure the more they are likely to interact. They will on encountering their antiparticle annihilate to photon energies.

Quarks, W and Z Bosons: The standard particle model has neutrons and protons each comprising of three quarks that explain charge. Such quarks are never isolated and it is wrong to think of them as major energy contributors to the energy of a nucleon. The three quarks energies are only about 1% of the energy of a nucleon. W and Z Boson energies are high short lived energies that accompany some nuclear changes. As there are considerable photon energies acting between particles we should not be surprised that changing them involves the release and re-making of photon energy interactions.

I am no particle physicist and I understand very little of particle mathematics. But, as I have said before – my blogs are about making people think and thereby improving our understanding. I hope this blog has done that. 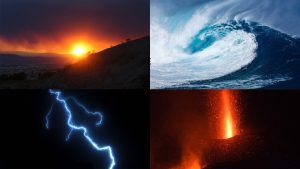